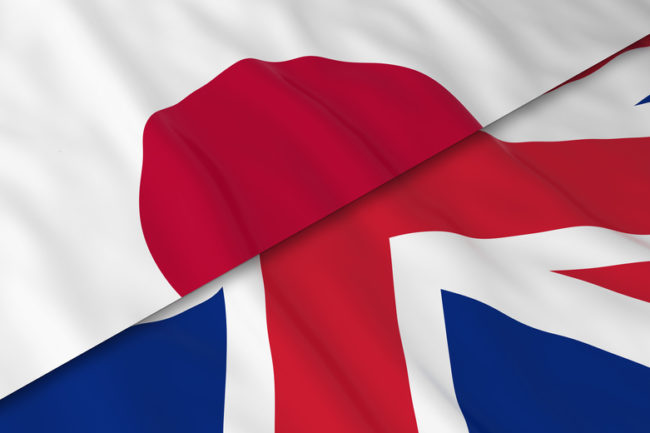 After invoking Article 50 on March 29, the United Kingdom is set to leave the European Union by March 2019. Yet with only 18 months to go and after a third failed round of negotiations, it looks increasingly possible that the parties may miss reaching a deal.

Such a scenario is problematic for non-European multinationals, many of which steer their EU operations from the U.K. The country has so far been the most attractive destination for non-EU companies looking to set up their European headquarters. In case of “chaotic Brexit,” many of the current advantages might not only disappear, but turn into outright disadvantages.

To navigate this challenging environment, companies need to prepare, and Japanese firms seem to be leading the way. Recently speaking to Japanese business representatives in Tokyo, Uwe Kerkmann, general director of the office of economic development at the city of Düsseldorf, said that Japanese companies are intensively playing through scenarios and considering implications of Brexit – and pointed out that investor groups from all over the world are looking at them for guidance.

Japanese companies at the forefront

This does not come as a surprise. With around 1,000 subsidiaries in the U.K., Japanese companies have extensively used the country as their door to the European market, said Düsseldorf’s mayor Thomas Geisel at the event hosted by NRW.Invest, the economic development agency of the German state of North Rhine-Westphalia. Referring to Japan’s Brexit warning letter, he explained that no other country has voiced its concerns as quickly and clearly. 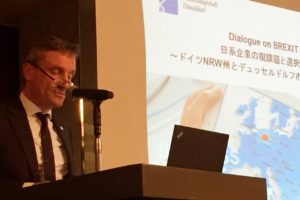 Geisel and Kerkmann certainly know what they are talking about. Düsseldorf, the city they represent, is considered to be the top-destination for non-financial companies relocating their European headquarters from the U.K. to the continent. It has also historically been the center of Japanese business activity in Germany and is home to around 7,000 Japanese nationals. The city is currently fielding numerous inquiries of Japanese firms pondering a possible revamp of their European operations.

To shed additional light on this potential threat, the Japanese Ministry of Foreign Affairs (MoFA) has commissioned in February 2017 a study concerning the impact of Brexit on Japanese companies in Germany. Conducted by PricewaterhouseCoopers with the support of the Japanese-German Business Association DJW, the study found that there is still great uncertainty and that no company has implemented concrete measures at this stage.

The primary impact expected from Brexit is volatility in exchange rates. Apart from this, Japanese companies voice concerns on issues across all industries.

Also speaking at the NRW Invest event in Tokyo, Masakatsu Suzuki, partner at PwC Consulting and author of the study, said that each company has to carefully analyze how Brexit will impact its organization. To do so, he suggests looking into the issue from four different angles: 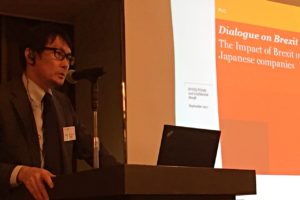 For example, one company of those surveyed intends to keep its EU headquarters in the U.K., stating that it needs staff to be fluent in English. But for companies that are active in the pharmaceutical industry, the decision to relocate their R&D team to the continent may depend on whether the European Medicines Agency (EMA) moves from London to another EU member state or not.

In a conversation following his speech, Suzuki said that he expects Japanese companies to stay in the U.K. for the first year after Brexit, but believes that they may, depending on developments, relocate in significant numbers afterward.

Where will Japanese companies move to?

A major driver for Japanese companies setting up European headquarters in the U.K. has been a 0-percent withholding tax on dividends to Japan, while other EU member states levied such a tax. This way, Japanese companies were able to repatriate profits from Europe by channeling them tax-free from EU member states to the U.K and again tax-free from the U.K. to Japan. Following Brexit, however, it is likely that this is no longer possible, as shifting money to the U.K. will now incur taxes.

By coincidence, a few months before the U.K. decided on Brexit, Germany and Japan signed a new double tax treaty between the two countries, which entered into force on Oct. 28, 2016. The new tax treaty effectively eliminated withholding tax for repatriating profits to Japan from Germany. 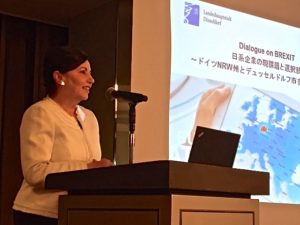 Then, on the eve of the G20 Summit in Hamburg in July, Japan and the EU reached political understanding about a new free trade agreement between the two important economic areas. The FTA aims to eliminate tariffs, increase mutual investment, open access to public procurement, and make progress on regulatory cooperation and convergence.

Considering the above, Germany seems to offer strong advantages for Japanese companies considering relocation in wake of Brexit. We hear that apartment leases in Frankfurt are already increasing rapidly as the city emerges as biggest Brexit winner in the financial sector.

At the same time Petra Wassner, CEO of NRW.Invest, says that North Rhine-Westphalia and Düsseldorf are quickly garnering interest with companies active in healthcare, energy and environmental technology, as well as information and communication technology. According to Wassner, the state already hosts over one-third of all Japanese companies in Germany and is adding around 30 firms each year.