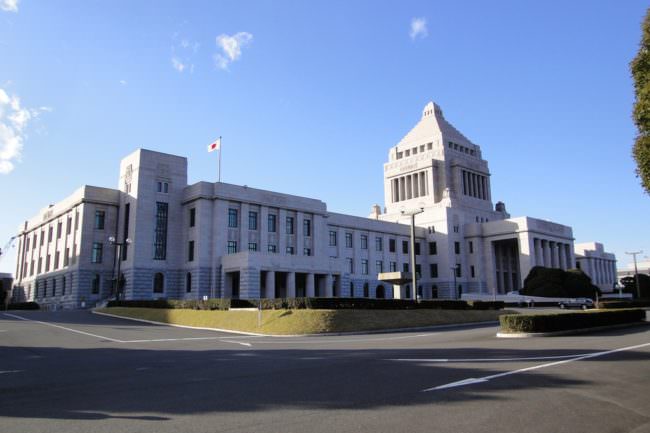 The Japanese political system is based on Japan’s constitution, which was drafted after the end of World War II. Enacted on May 3, 1947, it firmly established a democracy in form of a constitutional monarchy, which, similar to the U.K., maintained its long-standing imperial family as the honorary figurehead of the country.

From this point forward, governmental power has been distributed between three branches; the National Diet, the Cabinet, and the judiciary sections of the government. These entities serve as the legislative, executive, and judiciary branches respectively.

The Emperor: Above All, Controlling None

Following World War II, the role of Japan’s imperial family has gone from one of holding almost absolute power to that of a figurehead and ambassador for the country on domestic and international affairs.

According to the constitution, the Emperor carries out ceremonial duties, such as appointing the Prime Minister and the Chief Justice of the Supreme Court into office, and presenting distinguished awards from the government of Japan.

The current reigning emperor, Akihito, has long embraced a message of prolonged peace for Japan and the world.

Prime Ministers are not elected by a direct vote from citizens, but are appointed by the Diet. Therefore, whichever party holds control in the Diet will likely appoint their party leader to be the prime minister.

The Cabinet, the managing bodies of Japan’s governmental agencies, is appointed directly by the incumbent prime minister. Most Cabinet positions, called ministers, are required to be filled by existing members of the Diet. Ministers of State oversee the 11 ministries of Japan, which are specialized bureaus that direct policy over specific aspects of the nation’s operations.

In terms of accountability and maintaining their positions, the prime minister and the Cabinet are directly responsible to the Diet.

By providing guidance from a top down approach, the prime minister can align the goals and efforts of the ministries through the cabinet office, and drive a consistent policy across all reaches of the government’s ministries.

The Diet of Japan

The Diet’s main functions include appointing the prime minister of Japan, approving the national budget, ratifying international treaties, and creating and implementing amendments to the constitution.

The lower house, The House of Representatives, consists of 480 members who serve 4-year terms. 300 members are voted into office directly from their local districts. 180 of the members are preferred party members appointed via the proportional representation system.

Additionally, the executive branch has the power to dissolve The House of Representatives, resulting in an election before their 4-year terms are over.

The upper house, The House of Councillors, consists of 242 members who serve 6-year terms. Elections for half of the house are held every three years. 146 members are voted into office directly from their local districts. 96 of the members are preferred party members who are appointed into to power via a proportional representation system based on the amount of votes that were given to each political party.

The Judicial System of Japan

The judicial branch of Japan’s government consists of the Supreme Court, with one chief judge and 14 Supreme Court judges, and four lower classes of courts. The lower courts consist of eight high courts, 50 district courts, 50 family courts, and 438 summary courts.

The position of chief judge of the Supreme Court is decided by the cabinet but appointed by the Emperor through formal ceremony. The cabinet directly appoints the other 14 Supreme Court judges. All judges must be reviewed every 10 years after their appointment, and the retirement age is 70.

Photo: Supreme Court of Japan by Big Ben in Japan via Flickr

The Supreme Court deliberates upon the constitutionality of laws in the country, similar to their foreign counterparts in other democratic countries. Japan’s supreme court, however, will only rule on a case where an actual dispute has been raised from a lower court up to the Supreme Court.

Japan’s courts now run under a lay judge system, in which ordinary citizens are assigned to deliberate on cases with judges who are working for the courts. The lay-judges are not acting as a jury, but as a part of the judicial team in which six lay-judges will work with three professional judges to determine a verdict. This system was adopted and put into effect in 2009, and is now regular practice in Japan’s court system.

Political control of Japan’s government ultimately comes down to the Diet and how its members are allocated among party affiliations.

Currently, the conservative leaning Liberal Democratic Party (LDP) has held strong influence in national politics since 1955. There have been brief moments of weakness for the LDP, but they have overwhelmingly controlled the government during the majority of its current existence.

There are dozens of other active political parties in Japan, though rarely do they gain enough seats in the upper or lower houses to influence policy in a strong way.

As recently as 2009, the LDP lost its majority stake in the diet to the Democratic Party of Japan (DJP), who appointed their own prime minister in the same year. This shift of power was short-lived, and since 2010 the LDP has regained and remained in power.

Photo on top of article: National Diet of Japan by Dick Thomas Johnson via Flickr

Marketing professional with an automotive background based in Japan.
View all posts by Caylon Neely →