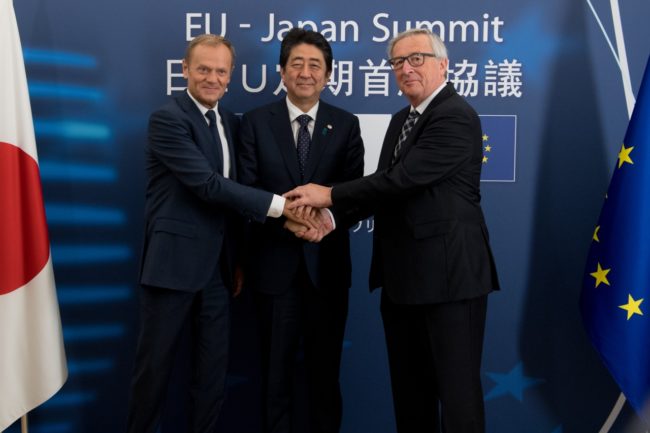 On the eve of the G20 summit in Hamburg, the European Union and Japan reached a political understanding about a new comprehensive free trade agreement. During the EU-Japan Summit, Shinzo Abe, Japan’s prime minister, hailed the agreement as “the birth of the world’s largest, free, industrialized economic zone.” EU officials proclaimed it “the most important bilateral trade agreement ever concluded by the EU.”

But the work is not quite done yet. Senior management needs to stay on top of developments and how they will affect their business.

The agreement, whilst not final, is also designed to send a clear signal against Donald Trump’s “America First” policy. It showcases that international cooperation in the 21st century remains vital to the prosperity and stability of the international order.

While political leaders at the EU-Japan Summit seemingly celebrated a done deal, the political agreement reached on July 6 so far only means that there is a deal on market access. A range of technical and legal issues still need to be resolved before a final text is agreed and both sides can move towards ratification.

After 18 negotiation rounds and four years of negotiations, the agreement covers 19 percent of global GDP and 38 percent of global goods exports. Political leaders, trade experts and industry representatives in Brussels and Europe see the agreement as a key opportunity not only to dismantle tariffs, but also to create a level playing field in public procurement, address non-tariff barriers (NTBs), increase access to services and investment, and enhance regulatory cooperation to the benefit of businesses and consumers.

Both the EU and Japan achieved a breakthrough on key issues: the European Union managed to gain substantial access for agricultural goods – especially dairy products such as milk and cheese, meat and wine – and access to Japan’s public procurement market, while Japan received more comprehensive access to Europe’s vehicle market.

But the work is not done quite yet. Businesses in Japan and Europe now need to get involved in the day to day work to ensure their interests are considered when the final decisions are made on the administrative level and during implementation. Senior management needs to stay on top of developments and how they will affect their business. The sooner businesses get involved, the smoother the transition into the new “Free Trading World” between Europe and Japan will be.

At a time of rapid digitization and increase use of Big Data, many pushed for an inclusion of data flows in the agreement. For now, data flows are completely excluded and will be reviewed at a later date.

The biggest open issue which negotiators will have to settle in the coming months is: investment protection. In 2016, questions about investment protection lead to large scale public and political opposition against the EU-US trade and investment agreement (TTIP) as well as leading to a delay of CETA.

The EU knows how sensitive the subject is for European lawmakers and the public, but Japan so far has rejected the EU’s proposal of a new kind of investment court, where judges are appointed by governments rather than disputing parties. Currently investment protection is excluded from the agreement and what negotiators finally agree upon remains unclear.

Negotiators will spend the next couple of months turning a political agreement into a final text. While the hope is that the agreement can enter into force quickly, it took three years for the EU and Canada to sign a final text. By the time Tokyo and Brussels put ink to paper, Britain may well have left the Union.

This time around, both Japan and Europe are aiming for a fast ratification process. Clear support from the business community will help political decision-makers to ensure a strong public case for quick ratification and prepare and inform the public about the benefits of the deal. Accordingly, businesses need not only to prepare internally but also act to support a quick implementation once a final agreement stands.

In challenging times for trade policy, the strategic value of the EU-Japan partnership has never been clearer. Today’s political agreement represents an important signal from two of the largest and most advanced economies in the world, that trade can deliver for all and remain an engine of economic growth and job creation. While it may take another couple of years before both sides enjoy the full benefits, the political will is strong to push the agreement over the finish line.

Japanese and European businesses should adopt a three-stage approach:

IDA Group can assist companies in preparing for intensified trade relations and ensure that they are best positioned to exploit the new market opportunities once the agreement is ratified.

Senior Advisor at IDA Group. Learn more about and contact him.
View all posts by Thomas Richter →