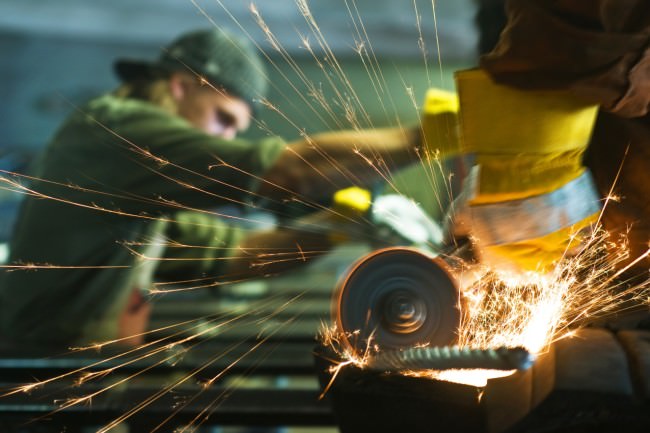 by TÜV Rheinland Japan on Feb. 18, 2016 in Regulatory Environment 0 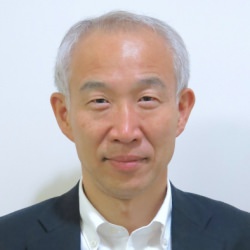 The year 2016 started with a number of news items that remind us of the importance of safety and quality management. From the tour bus incident and repeated food scandals we learned that we should always use a process approach to ensure safety and quality and limit damage to property and company reputation. In a continuation of the column article by my colleague, Mr. Sugita, I would like to share with you the general regulatory environment for workplace safety in Japan.

What is “Safety First”?

We often hear the phrase “Safety First (Anzen Dai-ichi)” in Japan. Many Japanese people may believe that this is a concept conceived in Japan, as a slogan used for example at construction sites. But it was actually first coined in the early 1900s by U.S. Steel, born out of the concept of “safety first, quality second, and production third.”

When introduced as company policy by Elbert Henry Gary, then President of U.S. Steel, work-related accidents were immediately reduced. Quality and productivity also improved at the same time, leading to great success as the company grew on the wave of a rising economy. In time, this safety first slogan spread across the U.S., and throughout the world.

Adoption of Industrial Safety and Health Act and OSHMS in Japan

In 1972, the Industrial Safety and Health Act had already been enacted in Japan, establishing criteria for danger prevention to prevent work-related accidents. It served to clarify responsibilities in the event of an accident and asked organizations to voluntarily promote measures to prevent accidents. 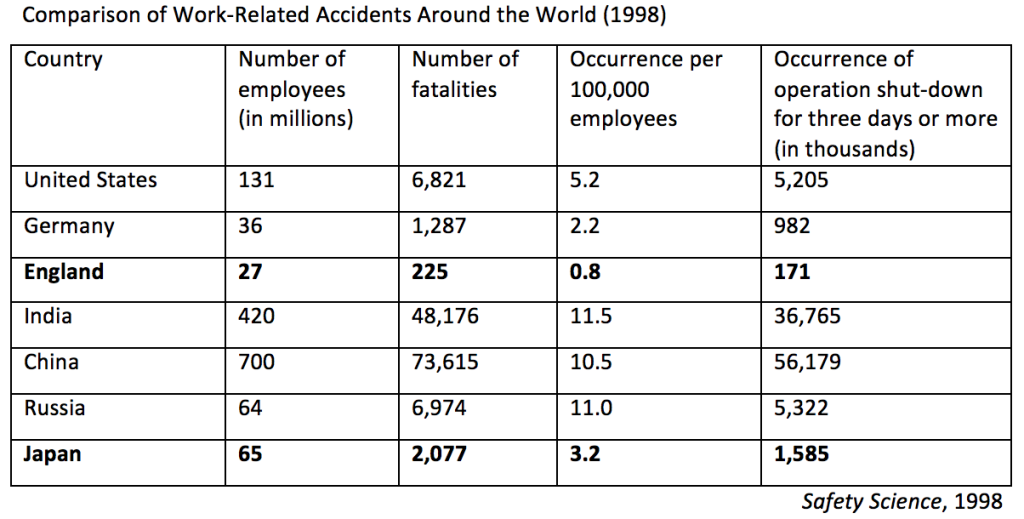 But by 1998, the number of annual fatalities from work-related accidents was in excess of 2,000. As a means of achieving a target of reducing fatal accidents to less than 2,000 per year, the government adopted the British national standard BS8800 Occupational Health and Safety Management System (OHSMS) on a trial basis. This was because the incidence of work-related incidents in the U.K. and the Severity Rate were considerably lower at the time.

The Severity Rate represents the degree of severity of accidents based on the number of work days lost over 1,000 work hours. The number of work days lost due to work-related accidents for the period for which the statistics are collected is divided by the total working hours of all workers for the same period, and this figure is then multiplied by 1,000 (Source: MHLW). 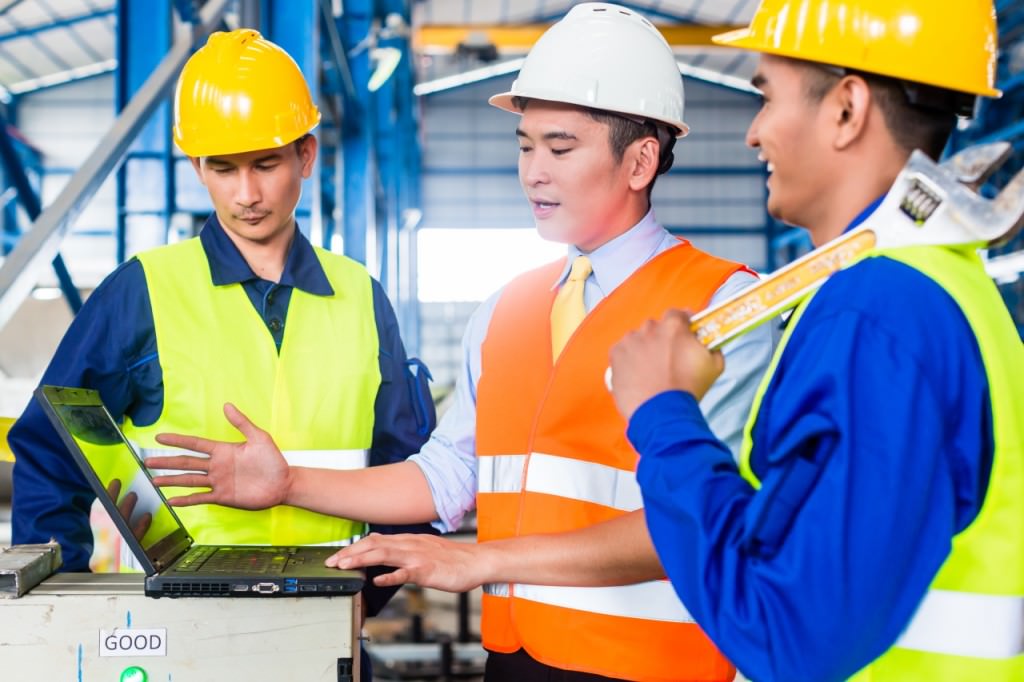 These standards were implemented on a test basis in certain national general contractors. As a result, the Rate of Frequency over one year was reduced from 1.2 to 0.3. Based on these results, the Ministry of Labor, now called the Ministry of Health, Labor and Welfare (MHLW), issued the “Guidelines on Occupational Safety and Health Management Systems (OSHMS)” in April 1999.

The U.K.’s BS8800 was issued as the international standard OHSAS 18001 (Occupational Health and Safety Management Systems – Specifications) by an international consortium in April 1999. The official version of this is currently the revised OHSAS 18001:2007.

Reduction of Work-Related Accidents Through the Adoption of Management Systems

With the introduction of Occupational Health and Safety Management Systems, the number of deaths from work-related accidents in Japan fell to 1,514 in 2005. In addition, there was a strengthening of risk assessments with the revision of the “Guidelines on Occupational Safety and Health Management Systems” in 2006. The implementation of risk assessments is a requirement of OHSAS 18001, and national agencies such as the MLHW and the Ministry of Land, Infrastructure, Transport and Tourism (MLIT) have recommended that organizations implement OHSAS 18001.

More specifically, looking at data for 2005, a significant difference can continue to be seen in the incidence of fatal accidents in Japan and the U.K. This is believed to be the result of the semi-compulsory application of BS8800 (the forerunner of OHSAS 18001) at the time of the Thatcher administration in the United Kingdom.

The report Trends in the Incidence of Occupational Accidents issued by the MHLW provides specific numbers of incidents of work-related accidents and serious accidents in Japan. According to this report, although the number of reported casualties and fatalities from work-related accidents in all of Japan has continued to trend downward from the enactment of the Industrial Safety and Health Act until now, the incidence of serious accidents is showing a significant increasing trend. 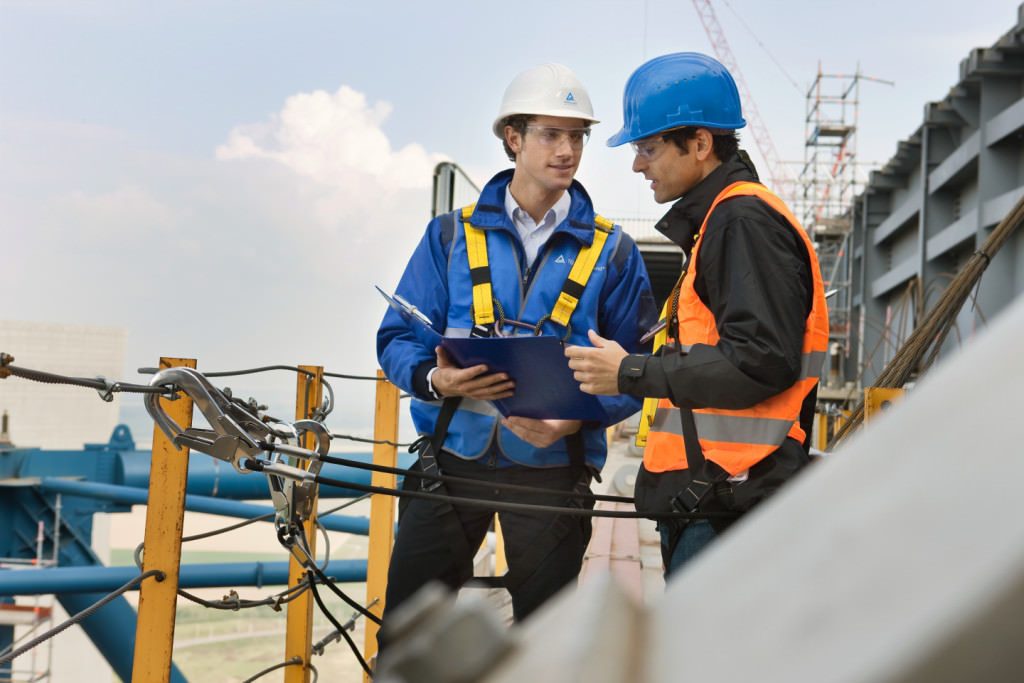 OHSAS 18001 will remain in effect for some time following the issue of this standard, but it is expected that there will be a steady move over to ISO 45001 in the future.

The purpose of introducing occupational health and safety management is to prevent work-related accidents. Further, if managed well, significant improvements can also be expected in the areas of management and costs.

The government is currently in the midst of implementing the 12th Occupational Accident Prevention Plan for 2013-2018. This is the pillar of the nation’s safety policy, and incorporates the introduction of OHSMS.

This policy includes stricter penalties for management with regard to serious accidents. Management may be held liable by the courts in the event of a serious accident, for breach of their duty to ensure safety considerations.

The introduction of management systems can also be said to be effective in reducing these kinds of risks.