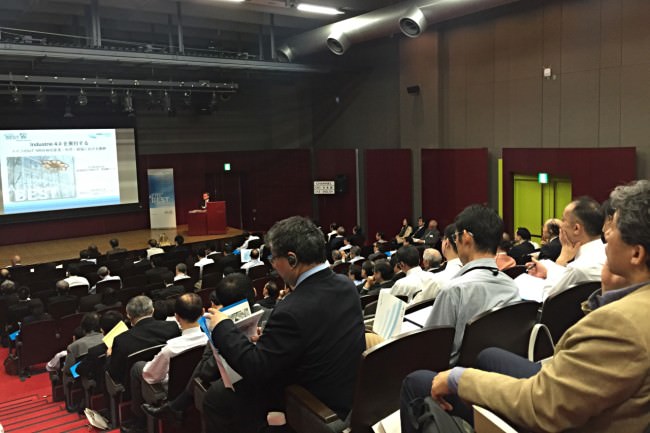 Germany’s famed Plattform Industrie 4.0 initiative has become nothing less than a mainstay at seminars focusing on the future of manufacturing. The U.S. based Industrial Internet Consortium has been gathering momentum, too. Even China has prominently launched its Made in China 2025 initiative.

Yet one of the world’s most important industrial powerhouses is apparently not much being talked about. One might be forgiven to wonder: What is happening in Japan, the land of “monozukuri,” of “making things”?

Major players are collaborating and potentially laying the foundation for future success. It may well be that the result will come as disruptive surprise to those who do not keep an eye on what is happening in Japan.

Quite a lot, actually, is the impression one gets listening to Hatsuko Kouroku from Fujitsu. She spoke as an evangelist for Japan’s Industrial Value Chain Initiative (IVI) at a conference hosted by NRW Japan at Japan’s National Graduate Institute for Policy Studies (GRIPS) in Tokyo last week. 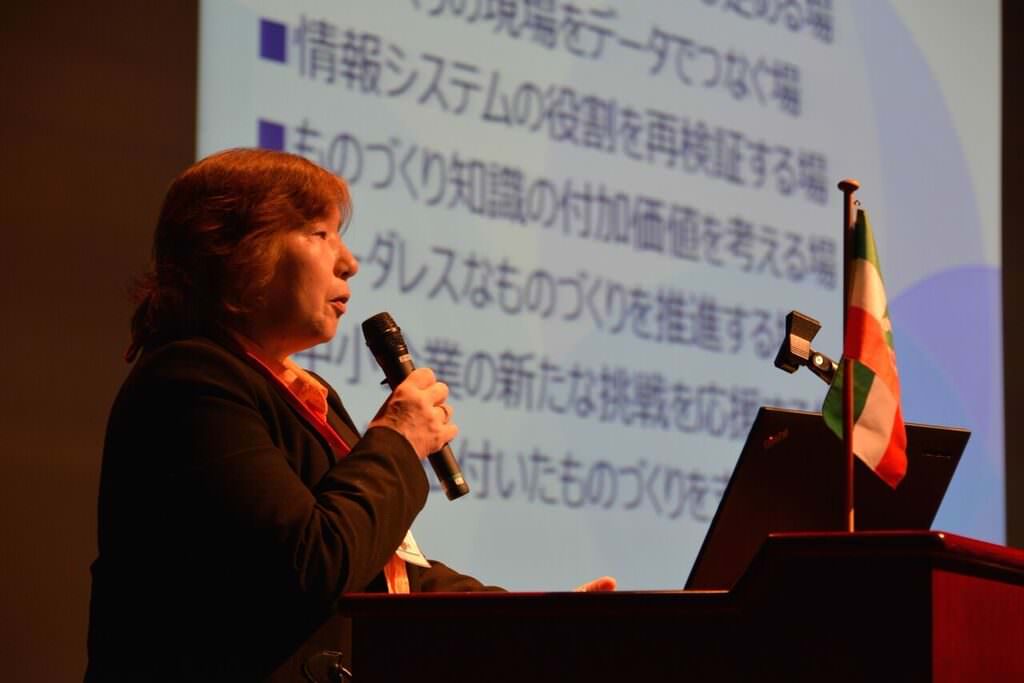 Speaking to over 200 people, Kouroku said that while being fairly well-known among Japan’s industry by now, IVI has yet to achieve broader recognition abroad. Activities so far taken place largely in Japanese, and she said that it is an important goal to increasingly communicate to an international audience in future.

Diverse Approaches Toward Internet of Things

Kouroku explained that from IVI’s point of view there are substantial differences between the three major consortiums.

In the U.S., with its remarkable strength in software, the Industrial Internet Consortium focuses on the use of big data and artificial intelligence to make manufacturing and services better. In Germany, Plattform Industrie 4.0 is rooted in production and aims at mass-customization. Meanwhile, IVI’s approach in Japan is based on the country’s monozukuri culture and places a focus on improvements at the factory floor.

It is perhaps unsurprising that, different from the U.S., both Germany and Japan approach industrial IoT with a focus on hardware. 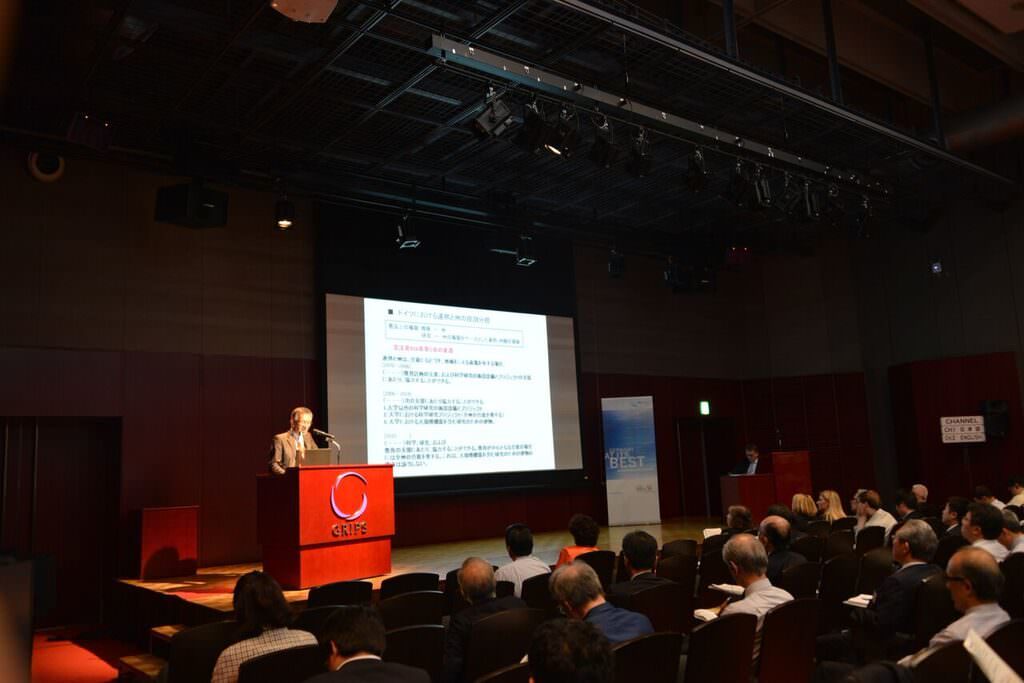 As Prof. Hiroshi Nagano of GRIPS explained in his talk at the conference, their economies are made up very similarly. At around 19 percent of respective GDP, manufacturing is an important part of national value creation in both countries. Even the most important industrial sectors mirror each other; automotive, chemicals, mechanical engineering and electronics and electrics.

Germany has launched its Plattform Industrie 4.0 initiative in 2012. However, there was nothing sudden about it, said Nagano. Based on a strong strategic focus, a variety of initiatives had already been started by the German government as early as 2006. Only in 2012, they were renamed and combined under the Industrie 4.0 umbrella.

Kouroku said that based on the realization that Japan is falling behind Germany, the Manufacturing System Division of the Japan Society of Mechanical Engineers (JSME-MSD) and the Ministry of Economy, Trade and Industry (METI) got together in April 2014 to discuss how to get things moving.

As a result, the Industrial Value Chain Initiative, or IVI, was founded and officially took up work in June 2015.

IVI believes that the traditional approach of Japanese firms to make everything they need themselves is not sustainable in today’s globalized world and aims to create opportunities for a more collaborative approach. This includes providing information on areas where companies can work together, and occasions to meet and engage.

Moreover, IVI targets small and mid-sized enterprises (SME’s) who may be too small to effectively use IoT technologies on their own. By providing a platform for collaboration, IVI aims at enabling them to together scale out their business size and open up new markets.

IVI is based on two principles. The first, Connected Manufacturing (“tsunagaru kojo”), targets to purge “muri” (overburden), “muda” (waste), and “mura” (unevenness) through digitally connected companies and factories, and to create smart value chains that are based on automation and human ability at the same time. 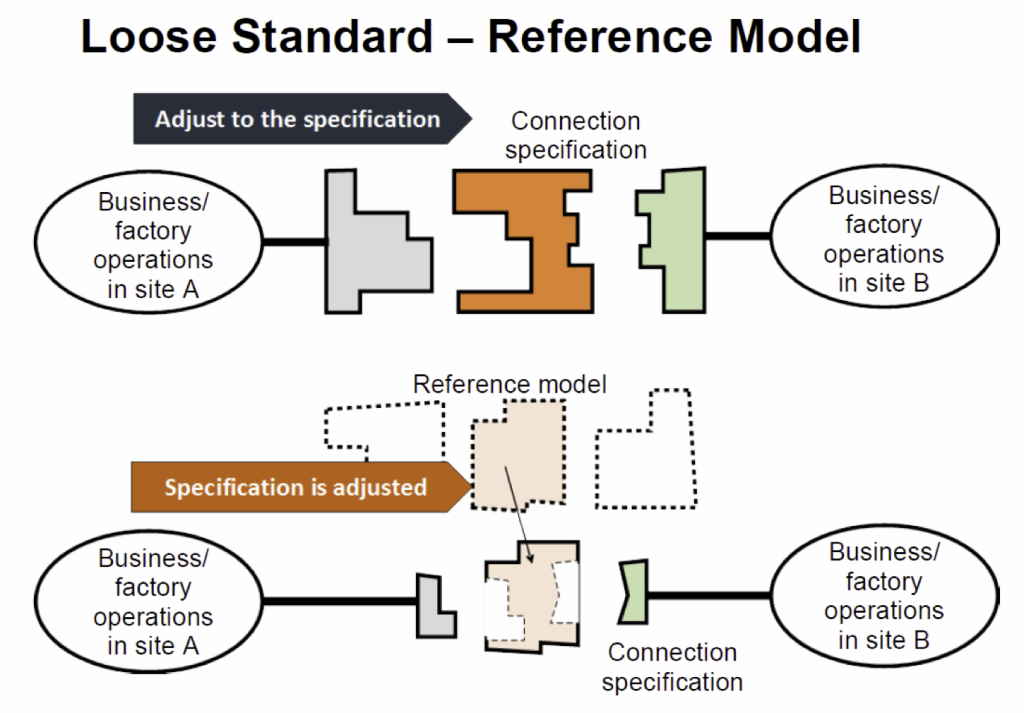 The second, Loose Standards (“yurunaka na hyojun”) means employing an adaptable model instead of a rigid system. Strict standards, as are common today, would face many challenges in complex manufacturing settings with old and new elements. Instead, a loose standard provides an idea of how to interconnect case-by-case. IVI is working toward developing a loose standard reference model.

Membership is Ramping Up Quickly

The initiative, which is funded exclusively by membership fees of its corporate members, is headed by Prof. Yasuyuki Nishioka of Hosei University. Membership is growing quickly. Starting out with about 30 companies in June 2015, membership stood at around 110 at the end of the year and has already reached about 150 firms by mid-2016.

The members list reads like a who’s who of Japan’s industry. Well-known firms ranging from Toyota and Panasonic over Canon, Mazda and Hitachi to Mitsubishi Electric, Fujitsu and Nikon just indicate the tip of the iceberg.

Membership is not limited to Japanese firms but open to all companies operating production facilities in Japan. German engineering and electronics company Bosch is a member, for example.

Organizationally, IVI hosts around 20 business scenario workgroups and four loose standard workgroups. Kouroku pointed out that workgroups derive considerable value from the fact that they are mainly made up of people who work at production sites and do not commonly have opportunities to meet and discuss with their peers working at other companies. Most of them hold regular meetings every month.

At the current stage, workgroups are tasked with developing scenarios of how their businesses may change in the future. In later phases, new technologies shall be developed, tested and demonstrated by member companies based on these scenarios.

A variety of documentation is slated for release soon on what has been achieved by end of March 2015. They will include business scenario reports, a manual for loose standards and a first version of the IVI reference model dictionary. A white paper on Connected Manufacturing will be published in both Japanese and English.

According to Kouroku, in fiscal 2016 (starting April 2016), IVI is planning to continue hosting business scenario and loose standard working groups, although some may be added and some consolidated.

Activities have so far centered on Tokyo, and workshops are now planned to be held in other areas of Japan, too. Quarterly large-scale symposiums for members will be conducted in Tokyo throughout the year; it is also envisioned to open one to non-members at Tokyo Big Sight later in 2016 .

Moreover, IVI is also planning to increase publicity in English outside of Japan.

Internet of Things in Japan: A Disruptive Surprise?

Reinhold Achatz, chief technology officer of ThyssenKrupp AG, who also spoke at the conference, said that digital transformation will change all industries and that classical businesses have a good chance of winning if they use the new opportunities proactively – because they already have the assets. 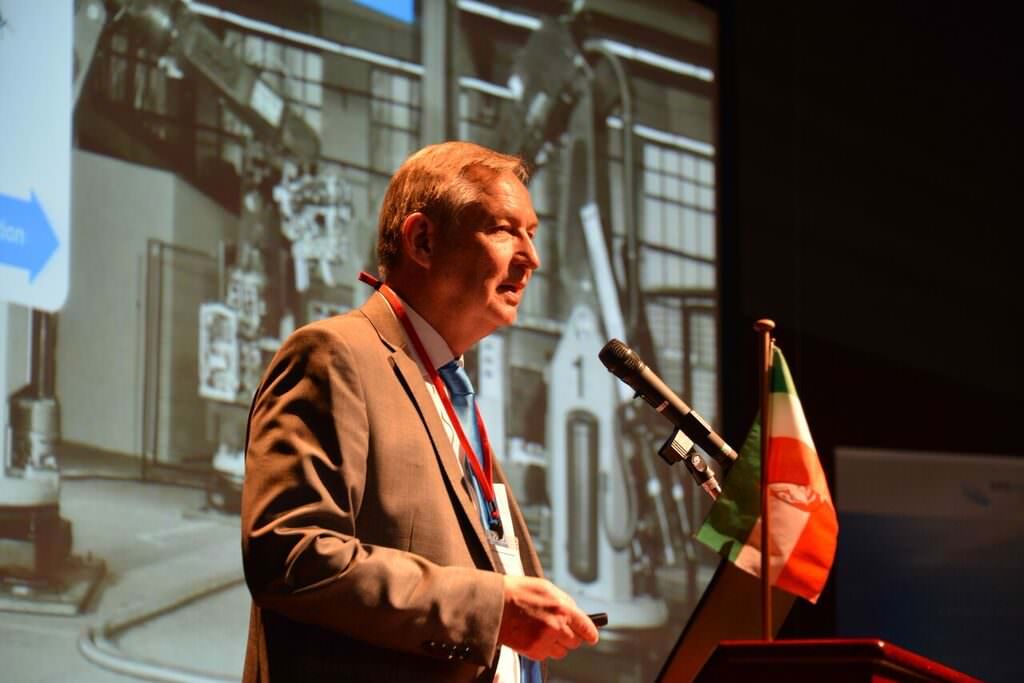 In our understanding, classical businesses are considerable strengths of the German and Japanese economies. And while Germany’s Plattform Industrie 4.0 initiative takes spotlight, Japan is plowing ahead quietly but systematically.

Major players are collaborating and potentially laying the foundation for future success. It may well be that the result will come as disruptive surprise to those who do not keep an eye on what is happening in Japan.

The conference “Enabling Industrie 4.0 – Business opportunities through the ‘Internet of Things’ in Germany and North Rhine-Westphalia” was organized by NRW Japan K.K. and held at the National Graduate Institute for Policy Studies in Tokyo on April 22, 2016. The event drew over 200 people. 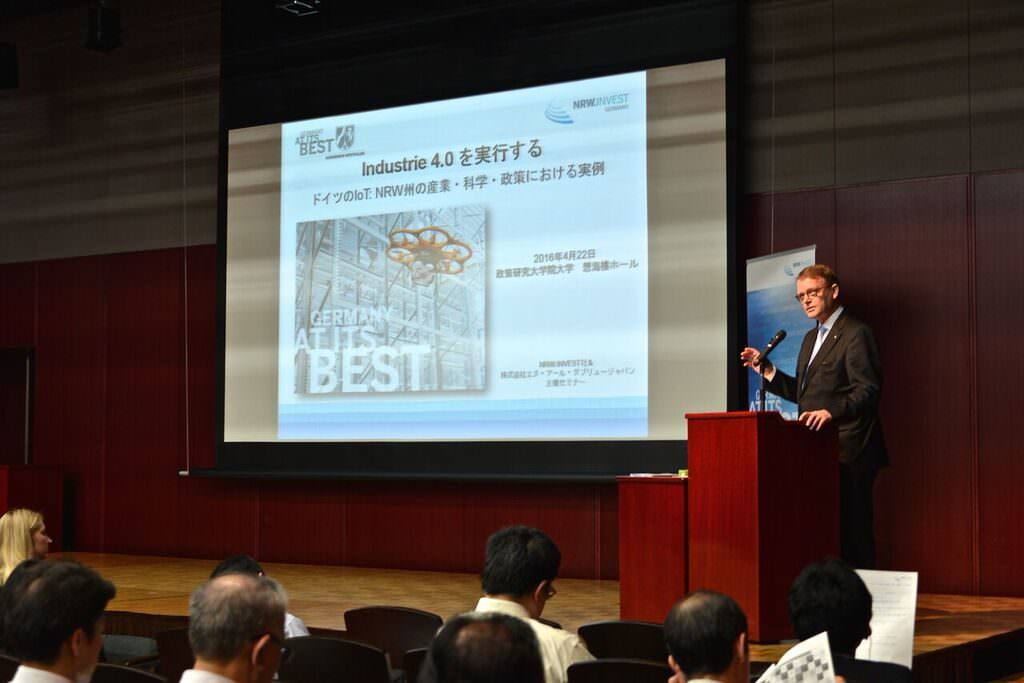 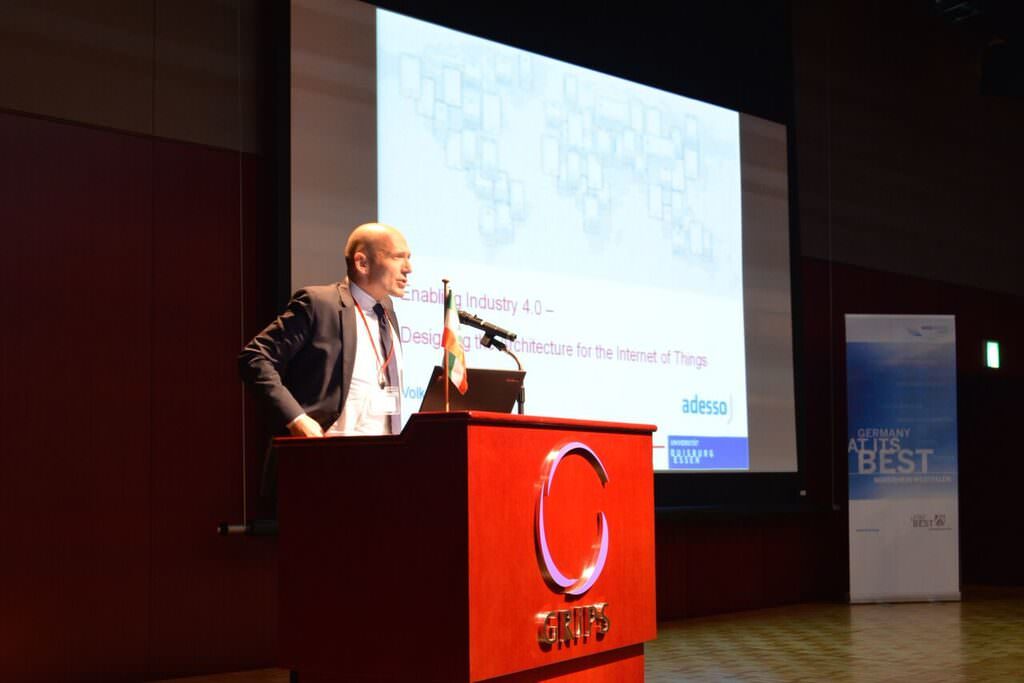 Effective B2B Communications in Japan: The Vital Role of Strategy
The Japanese Candidate