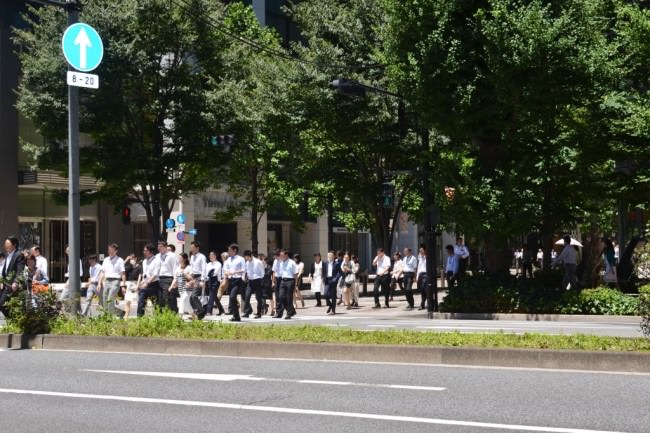 As one result of a globalized economy and a declining population the “war for talents” has reached Japan. The first generation of baby-boomers also is going into retirement and the rate of unemployment, 3.6% as of January 2015, is shrinking. Together this leads to a shortage of manpower. A low birth rate and an over-aged society will play its part in the future as well.

The hiring of university graduates alone as it was the traditional method for Japanese companies so far to find “white collar” personnel cannot longer fill-in the gap and is not well-established with foreign companies here in Japan. One reason is an educational system which in general orientates itself more on socialization then gaining academic knowledge to build on.

Domestic companies have begun to re-think their hiring strategies. Foreign companies as well are feeling the pressure when it comes to hiring management candidates on different levels. For both groups the externally hired mid-career candidate is firmly in focus.

Japanese managers continue to show a high degree of loyalty towards their employers. But the attitude to build an individual career path is on the rise.  Was it unthinkable a few years ago to be open for an external career step, it is now not uncommon to consider suitable possibilities.

Experience nevertheless shows that employers are preferred which show a high stability, prospects, commitment to the market and local customers, and are able to convince with their product and service portfolio. Other factors of attractiveness include the step-up to a higher position with more responsibility and the offering of a performance-based compensation system. The company location is also crucial in a country that tends towards centralization. Tokyo is and remains the center of the labor market. Companies that are located in other prefectures complain more often about less good chances of getting qualified staff.

The Japanese society in general still rather expects of men to pursue a professional career, women are often not recognized as potential candidates for specific management and technical positions. Female careers are shorter and mostly done in the administrative area. In other areas such as Human Resources, Marketing or Communications they occupy mainly staff and line management functions.

Even if Prime Minister Abe has announced “Womenomics” to initiate a policy change, the given situation includes a perfect chance for foreign companies to find well educated female employees who do not want to accept the traditional role perception.

Another alternative to prevent employee shortages would be the opening of the labor market for foreign workers which is already to some extend recognized i.e. in the nursing field.

Nevertheless, Japan has not yet connected itself to the “candidate high way” that extends from Seoul to Singapore and Dubai, on which already potential management candidates actively move. So, recruitment is usually still a purely domestic matter.

Even in Japan companies can attract potential employees via the advertisement of vacancies in print media, including all major newspapers such as Asahi Shinbun, the Yomiuri Shinbun, and the Nihon Keizai Shinbun (Nikkei). The Nikkei in particular seems to be more eligible as it is read mainly by managers and specialists. An ad in the English-language Japan Times may attract potential Japanese candidates but is mostly read by foreigners.

But price and performance are not indicators which relate to each other. A single placement of a 5.5 x 6.0 cm ad can easily exceed 1.0 Mil. Yen.

Another option is the Internet, which has become the most popular medium for job searches in Japan.

Beyond others, sites like Daijob or en-japan are widely used. Companies can actively place ads, screen potential candidate CVs and later on get in direct contact. They can be used either on a monthly membership or one-time basis – the cost varies accordingly.

Both search paths attract potential candidates who are actively seeking a new job. But also trigger a wave of initiative applications which may not fit to the job profile.

For the search of middle, senior and executive management candidates nevertheless the method of direct approach is the most appropriate.

The recruitment consultant market with approximately 15,000 companies throughout Japan is still far from being mature and consolidated. As the industry has set no adequate standards it shows uncontrolled growth in regards to professionalism. For example, a license is necessary but can be gained by everyone. Qualifications and competence are not required.

Basically there are two groups of personnel consultants, Contingency agencies and Retainer firms. The first makes up around 95% of all search companies in Japan.

Contingency agencies collect candidates willing to change even without reference projects through their homepages or use internet searches or cold callings.

Resumes are entered into database and are accessed based on project by keyword search and send to client. Since these companies receive a payment only in case of successful placement they typically rely on presenting their clients many resumes to choose from. But little time is spent with the compilation of search profiles and active candidate assessment.

Depending on the agency, they charge between 20 to up to 40% of the first annual gross income of candidates.

Some Contingency agencies are working reliably well. But as the industry is relatively unregulated, there are a few “rotten apples.” Staffed with inexperienced agents, they act aggressively focused on own turnover and with a low level of compliance.

Which unfortunately makes our industry not always appear in a good light in the eyes of potential candidates, and sometimes clients.

The second group comprises the Retainer firms known under the term Executive Search. They focus on higher management positons and the first ten internationally renowned foreign personnel consultancies mostly have offshoots in Japan.

Searches are normally performed based on detailed position profiles and under compliance with strict off limits in regards to target company lists, and confidential handling of individual candidate and client information.

Consulting fees of these companies generally cover 30 to 35% of the first annual gross income plus offered fringe benefits of the candidate employed. They do not charge on successful placement, but in fixed instalments either on a time or milestone retainer structure.

Again, there are differences depending on the company, the qualification and experiences of consultants, the search approach and the understanding of the market.

Belonging to the latter group of consultants I am working here in Japan since 2003 and serve international and domestic companies active or to be settled in the local market. I hope that the points raised found your interest and invite you to read my upcoming columns here at the Japan Industry news site.

The Japanese Rubber Industry
Understanding the Role of Contracts in Japan