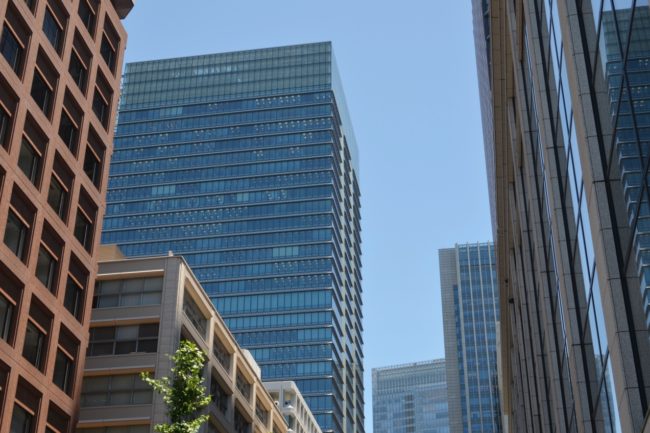 Japan’s trade balance last year marked its first surplus in six years, according to the recently released Global Trade and Investment Report 2017 by the Japan External Trade Organization (JETRO). At the same time, the country’s outward FDI stood at record highs, while inward FDI from Asia to Japan continued to grow.

In 2016, world trade (merchandise trade, nominal export value) declined by 3.1 percent from the previous year to $15.6 trillion (JETRO estimate), marking negative growth for two consecutive years. It is the first time since the period from 1981 to 1983 that negative growth was recorded in consecutive years. The trade volume (export basis) levelled off with a slight decrease of 0.2 percent, the lowest growth rate since 2010. Meanwhile, the value of world trade has been declining at a slower rate since its highest rate of decline in the third quarter of 2015, and is expected to see positive growth in 2017 overall.

Factors contributing to pushing down the value of world trade were declines for the U.S. and China for two consecutive years in both imports and exports and declines for commodity exporters – 41 emerging and developing economies and seven developed economies – due to a drop in commodity prices. On the other hand, European countries such as Germany saw relatively brisk growth. Vietnam and the Philippines also showed high increases in both import and export and in import, respectively.

Looking at trade value by product category, approximately 80 percent of the decrease in world trade is attributable to declines in commodity-related products. Amid shrinking trade in many categories, however, certain products showed an increase, such as transport equipment, turbines, pharmaceutical products, industrial robots, semiconductor manufacturing equipment and integrated circuits.

Amid weak world trade overall, the stable growth of consumer goods is remarkable, as shown by continuing increases in imports, even after 2012, of products such as passenger vehicles, telecommunications equipment, processed food, clothes and pharmaceutical products.

As trade of services has done comparatively better than the sluggish trade of goods, we can say that it has proven more resistant to the economic slowdown. By category, remarkable gains can be seen in telecommunications, computers and information as well as business services, and by region in exports of emerging and developing economies. Trade expansion in the service sector is expected to bolster the growth of emerging and developing economies.

In export, the U.S. was the largest partner country for four consecutive years with $130 billion, up 3.3 percent, driven by increases in automobiles and construction machinery due to robust consumption in its market. The export to China increased by 4.2 percent to $113.9 billion, boosted by rises in semiconductor manufacturing equipment and automobiles and auto components. The EU saw a rise to $73.4 billion, up 11.2 percent, led by growth in such products as automobiles in Germany and railroad vehicles in the U.K.

While world trade experienced a robust export of consumer goods in the midst of a slow trade overall, Japan – in addition to a rise in passenger vehicles – showed strong growth in many products within the categories of intermediate goods and capital goods, including semiconductor manufacturing equipment and parts for airplanes and helicopters.

Japan’s outward FDI in 2016 increased by 24.3 percent from the previous year to $169.6 billion (on a balance of payment basis, net, flow), which was a record high since comparable records began in 1996 and surpassed its peak of $155.6 billion marked in 2013. Looking at major countries and regions, investment in the EU almost doubled from the year before, largely due to growing investment in the U.K. The U.S. accounted for approximately 30 percent of total investment, remaining the largest destination country for seven straight years.

JETRO surveys indicate that there remains a shift to ASEAN among Japanese companies. In the overall trend of restructuring bases and functions related to sales and production at home and abroad, there is a growing pattern of such transfers being made by Japanese companies from China to ASEAN.

In FY2016, overseas sales of Japanese firms continues to account for a high share of their total sales at 56.5 percent. By region, the Americas have seen the ratio increasing over recent years, accounting for slightly above a quarter of the total at 26.3 percent.

Inward FDI from Asia to Japan continues to grow

In 2016, the value of Japan’s inward FDI (on a balance of payment basis, net, flow) was $34.9 billion, which surged approximately six-fold from $5.6 billion reported in 2015 and marked a record high since comparable records began in 1996. By region, investment from the Europe increased significantly through such activities as mergers and acquisitions (M&As) in the pharmaceutical and automobile components industries.

In recent years, the number and value of acquisitions of foreign companies made by those of Asia are increasing considerably. The composition ratio of East Asia – a total of that of China, Korea, Taiwan, Hong Kong, and ASEAN – to the entire value of the world’s cross-border M&As spiked from 2.3 percent in 2000 to 13.6 percent in 2016. Of those countries, the value of acquisitions by China hit the highest mark at $120.4 billion in 2016.

Measures to restrict trade introduced after the global financial crisis keep accumulating. According to the World Trade Organization (WTO), of 1,263 trade-restrictive measures that G20 countries introduced between October 2008 and October 2016, only 408 actions were lifted.

The new administration in the U.S. is deeply concerned about the trade deficit of the country. In March 2017, President Trump issued an executive order to review the causes of the U.S. trade deficit. The deficit with China in particular accounts for nearly half of the overall trade deficit. U.S. is likely to continue seeking the reduction of its trade deficit with partner countries by strengthening the enforcement of trade remedy measures and trade laws.

The EU, which has continued its expansion until now through promoting supranational integration, is currently facing many difficult challenges, such as negotiations with the U.K. on its withdrawal from the union, different stances among member countries on what form integration should take, and immigration and refugee issues. Reflecting the intentions of western European countries centering on Germany and France, the EU is modifying its policies to aim at multi-speed integration, which allows member countries to take different stances by area – such as Economic and Monetary Union and foreign policy cooperation – for how fast and to what extent they will tie with the EU depending on each country’s capacity and motivation.

Some Western countries have seen support for inward-looking policies against globalization expanding, with such events as the U.K.’s resolution leaving the EU, the Trump administration’s withdrawal from the TPP, re-negotiation of the North American Free Trade Agreement (NAFTA) and tightened migration policies. As growing disparities in income and employment are said to be responsible for this trend, the main reason of the widening gap is generally considered to be technological advancement rather than globalization.

With the emergence of a social stratum left behind by globalization being identified, the significance and effectiveness of establishing inclusive multilateral trade rules based on the WTO’s initiatives have been reaffirmed.

Over recent years, the WTO has made steady progress.

Among its achievements, the WTO Trade Facilitation Agreement -entered into force in February 2017- was remarkable. Realization of simplified trade procedures and increased transparency based on the agreement is expected to encourage all players, including SMEs, to take part in trade.

Value of multilateral trade rules reappraised in regulations and standards

Along with technological advancement, in recent years, strategic measures aiming to gain an advantage in international development of goods and services by securing international standards are increasingly taken on the policy level of countries and regions as well as on the business level.

The number of the Technical Barriers to Trade (TBT) notifications – sent by WTO members to the Secretariat in such cases as creating regulations – surpassed 28,000 since the system launched, with more than 2,000 added almost every year since 2012. TBT notifications are contributing to increasing transparency in regulations. The TBT Committee at the WTO has prevented trade disputes by handling specific trade concerns (STC) raised by WTO members.

According to the United Nations Conference on Trade and Development (UNCTAD), the sales value of world electronic commerce (e-commerce) in business-to-consumer (B2C) transactions in 2015 is estimated to be $2.9 trillion. China seems to have already overtaken the U.S. as the world’s largest market. With India’s annual average growth rate from 2016 to 2020 expected to reach almost 40 percent, India is likely to grow at a larger pace than China.

A JETRO survey (FY2016) targeting Japanese companies shows that 24.4 percent of the respondents have used e-commerce to sell products, with 47.2 percent of them being engaged in international sales. While many companies cited Northeast Asian and Western countries as current sales destinations, they have high expectations for ASEAN countries as future markets. Some of the cases brought up in the field interviews illustrate that e-commerce has been serving as an alternative way for them to expand into new markets.

In using e-commerce, many companies pointed out payment and logistics as challenges. Regarding payment systems, a number of countries and regions primarily use cash-on-delivery and credit-card payment. However, in developing economies without the necessary infrastructure, the establishment of alternative payment systems has become the key to business growth. In terms of logistics, the availability of reliable logistics operators and the efficiency of customs are among challenges that companies engaged in e-commerce have to face when delivering products to consumers. There are companies taking progressive approaches to address these issues around the world.

While e-commerce market is expanding worldwide, there exist regulations which could possibly become business barriers. Data related regulations including data localization have continued to increase as the number of internet users rises especially since the latter half of the 2000s.
As various international organizations have been trying to create rules for e-commerce, WTO, in response to the momentum of the establishment of rules which has occurred in tandem with the growth of the e-commerce market, started discussions at the special session on e-commerce in July 2016.
Free trade agreements (FTAs) have also included provisions on e-commerce since the 2000s. Many of the world’s nearly 60 FTAs with e-commerce chapters have been concluded between the U.S. and its FTA partner countries. U.S.-style e-commerce chapters are prevalent.

When Japanese companies develop overseas business such as by exporting and entering foreign markets, securing human resources is the biggest issue. Domestically, Japan is facing a significant decline of people within the working generations which sustain business activities. Comparing the country’s ratio of the working-age population to the total population with that of other major developed economies, it is obvious that Japan is seeing a decline at an exceptionally high pace.

In 2016, the number of foreign workers in Japan reached 1,083,769. This was the first time it exceeded one million. Among these workers, highly skilled personnel which support the overseas business development of Japanese companies generally fall into the category of specialized or technical fields, numbering about 200,000 people.

When asked about the advantages of employing foreign personnel in a JETRO survey, “expanded sales channels” had the highest response ratio among firms who employ foreign directors or managers. Being able to incorporate a diverse range of perspectives in management through tapping into foreign human resources can have a significant effect for Japanese companies. As employment of foreign personnel becomes common, it is expected that “contribution to development of new products” and “improved problem-solving ability” which relate to technological innovation going forward are likely to grow.