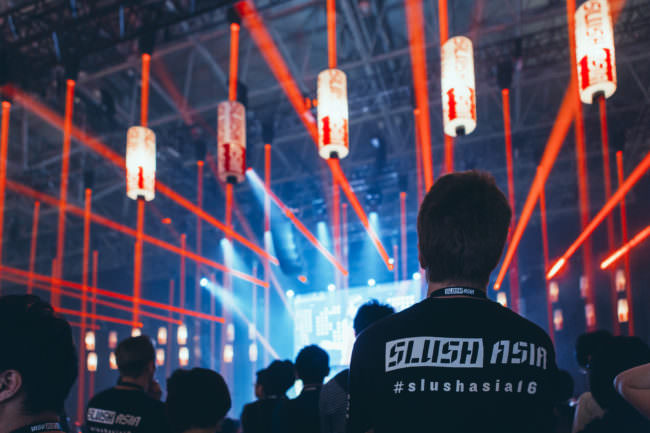 Makuhari Messe, just east of Tokyo, is one of those vast hangars where idols take the stage. Tonight’s entertainment looks like any other night. Strobe lighting swoops around the darkened arena, illuminating thousands of expectant faces. It’s a made-for-Instagram moment. Atsugiri Jason has been warming up the crowd. Chiba expects.

Except, when Japan’s latest idols take the stage, they’re not the usual pretty boys with dance routines. Instead, they’re startup founders wearing t-shirts, glasses, and lanyards: TED speaker meets coder chic. There are no songs about romantic love, but much earnest talk about finding your passion early in life and building something from nothing. We’re at the Slush Asia event in May this year, and there’s plenty of evidence that startup culture is going mainstream in Japan, at least among the under-25s.

Is startup culture having a profound effect on Japanese youth?

Originating in Finland in 2008, Slush brings startup founders and investors together using matchmaking software. It has also been incredibly successful at bringing young people to its events by infusing startup culture with entertainment and spectacle. Most of the under-25s at the Slush Asia event in Tokyo were recruited as volunteers or had bought student tickets that cost just a few thousand yen.

Japan is renowned as the last outpost of the salaried worker, a nation where social scientists were reporting very recently that young people were the most risk-averse generation ever, with no ambition other than to find secure employment. So how did Japan suddenly embrace startups, the very definition of risk-taking and insecurity? And is startup culture having a profound effect on Japanese youth?

The answer has profound implications for the future of employment and particularly the status of Japan’s bluechip firms, which have until now enjoyed the first pick of graduates.

Startup Founders: From Zeros to Heroes, or at Least Tolerated Persons

Notwithstanding the burst of entrepreneurial activity that took place in the postwar period, Japan’s startup history begins in the late 1990s with the founding of a number of technology and internet ventures that have since become corporate titans in their own right.

Yet at the time, founders like Takafumi Horie (Livedoor), Masayoshi Son (Softbank), and Hiroshi Mikitani (Rakuten) were slightly mistrusted. The technology they were bringing to market — along with new, riskier methods of financing — threatened the old order. It was almost as if they had to take on the appearance of the male-dominated, buttoned-up Japanese corporation in order to prove that they would still play by the rules.

“The current generation of Japanese entrepreneurs is unique in one very important respect,” says Tim Romero, host of Disrupting Japan and a speaker at Slush Asia. “Firms like Rakuten and DeNA, while great businesses, were never trying to go head-to-head with NEC or Fujitsu. They were exploiting a new economic niche that technology had opened up.”

Romero views the latest generation as far more ambitious: “Many of today’s founders will point to large established Japanese firms and say – privately of course, publicly harmony must be maintained – ‘Yeah. Those guys can’t do what we do. We are going to take away their business. Maybe they will buy us in five years, maybe we are going to buy them in ten, or maybe they will be out of business in 20.’ It may seem odd, but this gives me hope for Japan.”

Not everyone is convinced that Japan is on the brink of change. Hana, 25, currently working at a startup in Madrid, is one of a generation of startup nomads who left Japan in search of a more entrepreneurial way of life. She thinks the growing interest in startups in Japan is more of a lifestyle choice than an attempt to create something of value to society:

“My general impression of young people, mostly students, who are interested in startup culture is that they are fun, energetic, creative and motivated people, but they still think inside the box as they are still trying to follow something, or not follow something. People are using startup culture in order to escape from the traditional Japanese shukatsu (jobhunting) and stop wasting time at useless shukatsu seminars.”

Makoto, 22, a volunteer at Slush Asia, also voices a concern that no distinctive Japanese startup culture has emerged from the event and that other countries are still in the lead when it comes to disruptive innovation.

Their opinions converge on a key point: the Japanese startup scene, for those at the bottom at least, remains a culture of participation — of wearing the t-shirt, being in the group photo, and calling yourself a founder on social media — rather than a movement aimed at disrupting society.

It remains to be seen how many of the audience at Slush Asia will carry startup values throughout their lives and how many are just dabbling in startup culture as an extension of the ‘play mode’ of the university years. When the floor of Makuhari Messe is swept clear of the last discarded Slush Asia lanyard, it will undergo another transformation and become the venue for corporate recruitment seminars like the ones I described in a previous column.

Today’s graduates are seeking a very different working culture from their peers of fifteen — or even five — years ago. The recovery of the graduate recruitment market since the recession of 2008-2009 has tipped the balance in favour of students, who are less inclined to offer their labor without the promise of meaningful work.

Internships, for example, did not play a role in graduate selection until quite recently, except for some technical jobs. Now students are increasingly signing up for internships with several companies as a way of trying out possible careers. The system already accommodates this: the academic load is lighter during the final two years at university to allow jobhunting to take priority.

We are also seeing the rise of the corporate startup event, where students get together to work on innovative tasks in small groups with mentoring from company employees. Sponsorship and hosting of such events has become a major trend in recruitment, and they can also be a way to keep current employees engaged.

Startup culture has made a late but dramatic entry into Japan. What remains to be seen is whether it will become a truly disruptive force or if, as Martin Koelling argues in The Japanese Way: Creative Conservation, Not Destruction, the forces of disruption will be co-opted for the greater good of society. The salaryman isn’t dead yet, but he would be wise to check his life insurance policy.

Some names in this article have been changed.