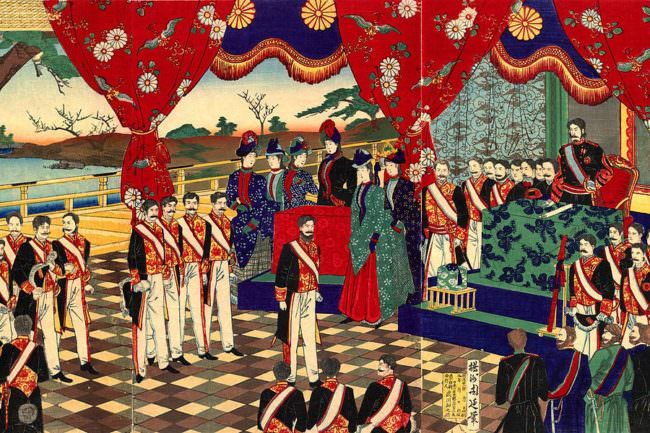 Anyone who believes that Japan will never embrace multilingualism would do well to picture this scene. Students at Japan’s elite universities are studying in English. Not just English, either: they learn about science in German and philosophy in French. European languages present a formidable challenge, but the students are not daunted.

We’re in the early Meiji Period, of course, and Japan is in its first full bloom of internationalization. Then, in 1890, comes the first of many bureaucratic interventions that will seal the fate of foreign languages in Japan. The Imperial Rescript on Education calls for a restoration of Confucian values in academia with all subjects to be taught in Japanese.

English doesn’t take root then, and the role of foreign languages remains as it was during the many centuries when Japan was a pupil of China: a means for importing foreign knowledge, the emphasis being on translation and analysis rather than communication.

English in Japan During the Postwar Period

Following WWII, Japan’s education system is given a modernizing overhaul. English, despite being made compulsory in secondary schools, is not central to the new national policy. Domestic reconstruction is the target, and that means a steely commitment to national economic growth.

Soon enough, a sprightly nation is back on its feet and Japanese firms are bullishly entering the U.S. and other global markets. However, there is little bureaucratic impetus to expand or upgrade the national system of foreign language education.

One notable exception occurs during the U.S.-Japan trade tensions of the 1980s, when Prime Minister Yasuhiro Nakasone needs a bargaining chip to deal to counterpart Ronald Reagan. He proposes a dramatic increase in the number of young American graduates offered English-teaching placements in Japan on the largesse of the Japanese Government. The JET Programme is born, and it says much that the impetus comes from the Ministry of Foreign Affairs with only reluctant involvement from Monbusho, as the ministry of education was then called.

The Japan encountered by those early JET participants would be familiar to readers today. English language (eigo) is taught in schools as an abstract body of knowledge concerning grammar and syntax, while English conversation (eikaiwa) is left to an unregulated private sector. No other country makes such a clear distinction between a language and its practical application.

The Impact of TOEIC on English in Japan

The private sector in Japan has been a reliable innovator of products of questionable benefit to language learners, from English conversation schools to speed learning methods. But perhaps its greatest contribution is the TOEIC test, the standard measure by which most English learners in Japan are now assessed.

TOEIC is conceived during the late 1970s as a new, business-friendly test of English communication. Crucially, it doesn’t require test-takers to write or speak in English, with far-reaching consequences for the direction of English education. The test is the brainchild of a Japanese businessman named Yasuo Kitaoka and ETS, an American nonprofit. Support for the test comes from the Ministry of International Trade and Industry. Again, the education ministry has no real input at this pivotal moment in Japan’s relationship with English.

A pattern should be clear by now: Japan’s difficult relationship with English has been one of bureaucratic intervention and non-intervention over more than a century, and has nothing to do with Japanese people’s natural ability to speak a foreign language. For evidence of that, see how easily most Japanese can integrate in a foreign country after living there for only a few years.

Japan and English in the Age of Globalization

Today, the messages from the cabinet office and the ministries are all soothing ones about inevitable globalization and English being at the forefront of education policy. Yet a more cynical view might be that the slow uptake of English in Japan served as a useful form of national protectionism throughout the turbulent Twentieth Century. The feeling has not entirely gone away: English is something we idealize, but too much too soon could be bad for us.

The reality is that a new era in Japan’s relationship with English will begin (if it has not already begun) when the forces of globalization make official policy redundant. There was a hint of that when Rakuten CEO Hiroshi Mikitani impudently declared he would require all employees to use English at work, a move that was followed in watered-down form by several other major firms.

Photo: Tokyo Tower Light-up for Tokyo 2020 by t-mizu via Flickr

But globalization operates at the individual rather than national level. Digital interconnectedness now makes each person simultaneously a citizen of the world and a citizen of their country, minus the dreary responsibility of being a national ambassador. And English – or more accurately, Globish – is quite handy if you want to be a part of it.

When I started my own education project in Japan called Workers University, I made a conscious decision to avoid national flag-waving and discussions of national character, even though our teachers come from many different countries. Our seminars are held in English because English is the most effective way to communicate with diverse groups of people in a diverse city like Tokyo, not because we aspire to be a bridge between Japan and the world (in my view an outdated concept).

Tokyo is recently experiencing a slow upsurge in things to do and see in English. As in the past, global sporting events and tourism are a major influence. But increasingly we are seeing new types of events (meetups, startup hubs, developer conferences) that have value in themselves rather than as efforts towards internationalization. The trend is a good one since it holds the practical value of English above the symbolic value. And grasping the practical value is key to Japan becoming just another nation fluent in English.